Important Primary research into the attitudes of school pupils to Mathematics.

1. Introduction to study and main findings

What did we look for in the Langley Park Survey of over 2,000 students and staff?

What percentages of school students of both sexes and all teaching staff of all subjects admit to some degree of Maths Anxiety?

What is the main finding?

Around 25% of the girls, 25% of the boys and 20% of the teachers in the girls’ school say they experience a significant degree of Maths Anxiety (this does not include the additional 15% who say they sometimes experience maths anxiety).

The Maths Anxiety Trust does not claim that all schools in Britain would provide similar results, only that if this is true of two highly regarded schools judged outstanding by Ofsted and with excellent exam results, it suggests there will be a serious wider problem. What is needed is a true picture of the incidence of Maths Anxiety in ALL British schools.

About the schools in the survey.

The two schools are comparable because they share the same area, intake, and excellent exam results ;  both have been classified as ‘Outstanding’  by Ofsted and highly ranked by other  respected organisations.

Participation in the survey was optional and anonymous, to better elicit authentic  comments.  Not all students responded. Responses were received from girls in the Girls’ School and 1134 from girls in both schools’; 921 from boys in both schools. 37  teachers, both male and female, in the girls’ school also responded, but no staff of the boys’ school participated.

In this overview, the results are reported by age, which does not necessarily correspond with the year groups in which students were taught. For example, the 16 year olds include the majority of the Year 11s who were about to take GCSEs but also some Year 12s who had already taken their GCSE.

Why should we worry about poor maths results in schools?

The Maths Anxiety Trust undertook this work because Maths is an essential tool for all 21st Century people, both in their private lives and in the workplace The possession of maths qualifications correlates more strongly than any other school qualification with later salary so maths is important for social equality.

Maths is also important to our country. Andreas Schleicher says,” There is no future without investment in education.”  Mr. Schleicher is Special Adviser on Education Policy to the OECD Secretary-General and Deputy Director  for Education;  he said, “If the United Kingdom were to ensure that all students had at least basic skills, the economic gains could reach $3.6 trillion (£2.6 trillion) in additional income for the economy over the working life of these students or 1.4 times the size of the current economy." [Times Educational Supplement,  19th January, 2018]

So it is important to discover why around 25% of English school leavers struggle with basic maths, according to their exam results.  Might one of the reasons be Maths Anxiety?

Who did the work?

The survey was carried out by the Headteacher of the girls’ school,  Dr Anne Hudson,  and the Headteacher of the boys’  school, Steve Parsons. We are grateful to Anne and Steve for their public-spirited willingness to courageously undertake a survey that might reveal problems with maths among some of their students.

Dr Anne Hudson also created the spreadsheet statistical analysis of the answers to the girls’ questionnaire, the bar chart and the relevant comments.  She writes,” There is clearly a national issue here.”

Professor Margaret Brown analysed the boys’ data and drew attention to the considerable similarity between the boys’ and girls’ data in her bar chart showing the comparison.

The seemingly simple questionnaire below was designed to ensure that it could be used, worldwide, in future psychological research.  This involved considerable help from Professor David Sheffield, Associate Head of Centre for Psychological Research, and Dr Tom Hunt Senior Lecturer in Psychology,  both at the College of Life & Natural Sciences at Derby University  and also by Associate Professor Sue Johnston-Wilder,  Associate Professor of Mathematics Education, Centre for Education Studies, University of Warwick.

Please rate your own attitude to  maths  by circling the number of the statement which matches it. Please only circle one number.

I never feel anxious about maths

I hardly ever feel anxious about maths.

Sometimes I feel anxious about maths or get a sinking feeling.

I always feel anxious about maths.

I panic if asked to do a maths problem.

Please write below if there is anything about your experience of maths that you would like to add:

3. How were the questionnaire papers analysed?

In addition to noting the percentages for each response by gender and age group, the responses were divided into 4 groups:

Further results of the Survey

b) The girls school findings are surprisingly similar to those of the boys school, whereas the research  literature suggests that girls are likely to be significantly more anxious than boys. Our result may suggest that girls  who are well taught do not differ from boys in their attitude to maths, or it may suggest that teaching girls separately from boys between the ages of 11 and 16 results in more positive attitudes among girls (there is some support in the literature for each of these explanations).

About  statement 10: I hate maths!

As Dr Hudson wrote,  "there is clearly a national issue here. We need to discover the national figures for Maths Anxiety in schools, decide the reasons for these, and then eliminate them. This seems likely to have a positive effect on reducing the 25% of students who struggle with basic maths." 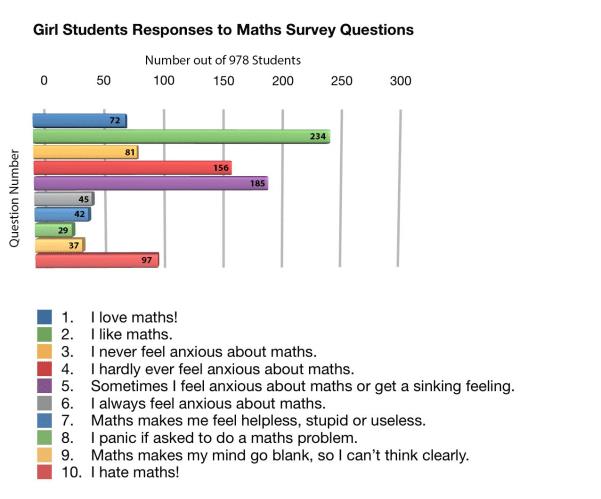 a ] Analysis of the survey

b ] Comments of individual girls

When you open The Excel workbook, you will see that there are two tabs at the bottom left of the page.

The 1st Tab gives you analysis of the survey

Langley Park School for Girls, Bromley  is a Secondary Academy school rated 4 star by SchoolGuide. Unusually high maths results were why we the project chose to focus on this school,  from 2009 onwards. Pupils are 75% white British, 25% ethnic origin, 8% get free school meals.

The survey was issued to the whole school in April this year –staff and students. As the chart over the page shows, 55% of our students have positive attitudes towards Maths, hardly ever feeling anxious about it or actually really liking it. In fact, those who love or like Maths are 31%. We expected this response because our school has always bucked the trend in terms of girls’ outcomes for Maths. We believe this is largely due to the positive impact of our Maths teachers, who promote a ‘can do’ attitude and to our ongoing whole-school emphasis on developing a ‘mastery mindset’. The key ingredient of that ‘mindset’ is the idea that abilities are not innate and that one can succeed with resilient, diligent application.

Students’ enthusiasm mirrors that of staff, of whom over a third (35%) actually said they love Maths. 62% of staff showed positive attitudes, hardly ever feeling anxious about it. This is a key factor in explaining successful outcomes not only in Maths but other subjects. Research shows that among the reasons why girls do better in single-gender schools is the presence of strong female role models.

While we are delighted that the majority of members of our school community are enthusiastic about Maths, we do take very seriously the 19% who sometimes feel anxious about Maths and the 10% who say they actually hate it. There clearly is a national issue here, and it’s reassuring to know that Shirley Conran and her team are raising it through this project.

Langley Park School for boys is a boys secondary academy school in Beckenham in the London Borough of Bromley, with a co-ed 6th form.  On 31st March 2011, the school converted from a Foundation School to an Academy and its current status is that of an "Academy Converter".  The school motto, Mores et Studia, means "Good Character and Learning". 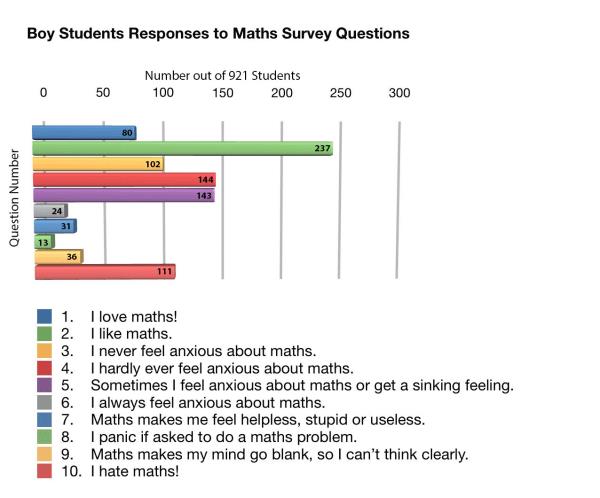 a) Analysis  of the survey

b) Comments by individual boys

When you open The Excel workbook, you will see that there are  two tabs at the bottom left of the page.

The 1st  Tab  gives you the analysis  of the survey

This spreadsheet  indicates that 45% of girls and 35% of staff of the girls school have maths anxiety to some degree.

The 2nd Tab gives you comments from individual boys.

To obtain a comparison of results between girls and boys, we have analysed the results of the same survey administered at the same time to pupils of the partner boys’ school, Langley Park School for Boys. We are very grateful for the co-operation of both schools in the project.

Langley Park School for Boys, Bromley, is also a Secondary Academy school and has a co-educational sixth form. It too is rated 4 star by SchoolGuide, has an Outstanding grade from Ofsted, and excellent maths results.

The most interesting finding was that the results were very similar for both boys and girls. (See the barchart on the next page). (For this comparison ALL Sixth Form  boys and girls who responded were added into the data irrespective of what school they were in.)  Generally in the research literature boys are shown to have more positive attitudes to mathematics than girls. This finding suggests that by good teaching and encouragement, girls can achieve similar results to boys. The fact that girls were taught separately from boys from age 11 to age 16 may also have been a contributing factor; this needs further investigation.

It also suggests that even in an excellent school, almost a quarter of boys feel very anxious about and/or very antipathetic towards maths, a similar proportion to that for girls.

The findings of this Survey  indicate that when 25% of school leavers cannot do maths according to their exam results and 25% of students who answered the questionnaire  would seem to have serious Maths Anxiety,  someone with the power to do so should perhaps check whether these two figures correlate.

Reading all the responses from boys and girls is a fascinating but sad task : clearly almost every student  is trying to be positive about maths;  nearly every one knows how important maths will be in their adult life; they are eager to learn.

One word was repeated again and again, by students of all ages:

There was high praise for specific teachers but there was also specific criticism.

Lessons were too hurried in order to keep up with the syllabus.  The teacher wrote on the whiteboard and they had to copy what the teacher  wrote: that was the lesson. When further explanations were asked for they were either not given, or the identical explanation was given again – and again when it was not understood.

Students want to be stimulated, energized and empowered.

We did not ask for students to suggest how to improve maths teaching – but they did.  Here’s how: